Hilary Angelo Gomes, popularly known as “Larry”, was born in Arima on 13th July, 1953, the son of Cecil and Kimlan Gomes.

He attended the Arima Boys’ Government School and Holy Cross College in Arima.

He established his reputation as an international cricketer playing for Trinidad and Tobago and the West Indies.

He toured England with the West Indian Schoolboys team in 1967 and he made his first-class debut as a left-handed batsman for Trinidad & Tobago versus the New Zealanders in 1971/72. He joined Middlesex in 1972 and played for the English County between 1973 and 1976.

He scored prolifically for Middlesex against the counties hitting 1393 runs with five centuries, including 190 against Derbyshire. He left Middlesex in 1976 and spent two profitable years with Nelson in the Lancashire League scoring nearly 1100 runs in his first summer surpassing Learie Constantine’s record seasonal aggregate. He followed that performance with another 1000 runs the next year.

The Packer years gave him his first international opportunity for West Indies and later, when the fences had been mended, he still kept his place. He was the slim, calm figure of reason amongst the mayhem that was created by the massive strokemakers that surrounded him. In this regard he was not the average Caribbean batsman at all: slightly built, upright, elegant in that way that left-handers have, and an efficient batsman in times of strife rather than an exuberant destroyer.

Larry Gomes scored six centuries against Australia, most notably one on a bouncy Perth strip in 1984 that set up an innings victory.

He made his Test debut versus England in the 3rd Test at Nottingham, England on 1st June 1976 and his One Day International debut versus Australia at Victoria Park, Castries, St. Lucia on 12th April 1978.

Following his debut tour with the West Indies team to England in 1976, he lost his place but returned to the Test arena in 1978 against Australia and led an assault by taking a century off the Aussie bowlers and, in the final Test in Kingston, Jamaica, he showed his grit by scoring 115.

Gomes toured India in 1978-1979 under Alvin Kallicharan and got three fifties in the first two Tests at Bombay and Bangalore. His omission from the side to England in 1980 infuriated his supporters but he was selected for the tour of Pakistan later that same year. He finished second in the averages with 48.12 and staked his claim to a regular position in the side.

Gomes underlined his advance by topping the batting averages in the subsequent three-match series against Australia in 1981-1982, scoring centuries at Sydney and Adelaide, on the latter occasion helping West Indies to a five-wicket win to square the series. All this contrived to give him a tour average of 78.60.

He developed a knack of rescuing the West Indies when better-known batsmen had failed. He excelled in the tour to Australia in 1984 heading the batting averages with 64.42. He and Jeff Dujon both scored hundreds as they put on 146 for the sixth wicket in the first Test at Perth.

Larry represented the West Indies in a total of 143 International Matches and was a key member of Clive Lloyd’s all-conquering team in the 1970s and 1980s. He played in the World Cup final in 1983.

He amassed a total of ten centuries during his Test career.

His highest Test score of 143 was made against England at Edgbaston in June 1984 in an innings victory for West Indies and he was named Wisden Cricketer of the Year in 1985.

When he retired from Test cricket he spent several years as Coach of the Canadian National team and was their Head Coach at the 1997 ICC Trophy in Malaysia.

Larry still resides in Arima where the Larry Gomes Stadium has been named in his honour. 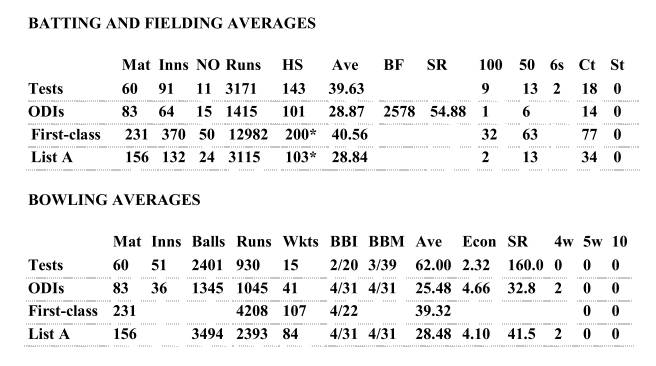 About six years ago I was requested to write a series of articles on the cricket career of Larry Gomes, which to my surprise was quite well received and there were several suggestions that the series be turned into a book for record purposes. I was not keen on the idea and was relieved when Larry said “people will remember what they want and the rest won’t matter.” However, over the years the topic that continues to evoke heat and emotion is Larry’s decision not to accept a lucrative offer to play in South Africa (SA) during the apartheid regime. Why did he choose country over “blood money”? (as it was labeled). Here is my first hand version of what took place. Early in 1983 I was conducting a management seminar in Jamaica when news came through that six high profile West Indies cricketers had received lucrative offers to play in SA. Larry’s name was not among them but the 1983 World Cup was coming up in England, so I advised Larry to keep his ear to the ground as he might be approached, a key reason being that his fair complexion was referred to in SA as “coloured” as opposed to “black” or “white”, which made him a very attractive proposition.

As it turned out, Larry did receive a phone call in England from someone who would not give his name and told Larry they could not meet for security reasons but indicated he was wanted in SA. Larry then coolly advised the caller that there was a guy named Hugh Henderson living in Canada, and he would deal with Larry’s affairs. It might have been nice of Larry to let me in on the secret which I first heard about when I entered my office in Toronto, answered a ringing phone to discover I was speaking to Dr Ali Bacher, ex-Test player and Numero Uno in SA cricket at the time. Dr Bacher invited me to meet him in London, I invited him to meet me in Toronto and we agreed to meet one another in New York along with Larry. There were many serious problems to deal with starting with the consequences of having a SA stamp in Larry’s passport, the question of where the Gomes’ second child expected in March 1984 would be born and the political consequences of that decision. Of course, both Larry and I discussed the probability that if he went to SA I might never see him again given the global feeling against apartheid and SA.

Even before Larry came into the picture, I had long asked my wife not to buy food products made in SA, especially as I worked in Zambia for the year 1967/68 and appreciated the politics of Ian Smith in Rhodesia and the general culture on the race issue. There were many emotional moments among members of the Gomes family and original prayers were composed for the situation! It was a tense three weeks before Larry and I went to NY to meet Dr Bacher who turned out to be a most charming, reasonable and trusting man. We were to meet Dr Bacher at 6 pm, and I vividly remember Larry and I kneeling in prayer asking for wisdom, guidance, courage and all other gifts necessary, before we climbed the steps to his room. Larry instructed me to work out the best deal possible which I promised to do, but reminded him that there was nothing in it for me, and he alone would make the final decision.
Dr Bacher explained the history of SA cricket and politics with which I was very familiar as apart from having cricket history as a life long hobby, I was also in Zambia at the time of the “coloured” Basil D’Olivera affair when he was selected for England to tour SA but was refused entry which started the whole messy matter.

In the next three hours a deal was hammered out which would have made Larry a very wealthy man, and then all of us went to an Indian restaurant for dinner, not that I felt like eating. However, even though the money was mouth watering, lots of other things were not. For example, Larry was not allowed to return to Trinidad in case his passport was confiscated; also he had to fly to Johannesberg from a special airport in New Jersey and not from New York or Toronto where he might be recognised. There were also special arrangements for him to be met in SA and private sponsors were lined up to endorse him. I may be wrong, but I think I was able to negotiate that none of the family would have a SA stamp in their passports. I remember feeling almost ill with worry when we returned to Toronto and I promised Larry that if he did not go to SA, Clive Pantin and I would organise a special Benefit Year in T&T for him when he would receive countless gifts from local companies to furnish his new home from top to bottom, and Clive willingly agreed as he was totally against Larry going to SA. The day Larry left for New Jersey was one of my saddest days, as I was sure I would never see him again. As long time mentor and student we both wept a million tears.

He phoned me from the New Jersey airport to say he was boarding in 30 minutes and I swear his tears flowed through the telephone. I vaguely recall my wife telling me that apartheid would not last forever and somehow it will work out okay for Larry and family. About an hour later my phone rang and it was Larry telling me that he had walked to the steps of the plane and then decided to turn back because he could not let down his country regardless of the money involved. I could hardly believe my ears and when I recovered I phoned Clive Pantin and told him the news. In between all I have written there were many situations to deal with, such as other West Indies players encouraging Larry to come to SA, but in essence the above captures the story of a hero who has never capitalised on his heroics but which is why I regard the Larry Gomes Stadium as most deserved recognition. The stadium reflects Larry’s cricket record but to me, it stands for his sense of values and principles. True to his word Clive helped me organize Larry’s Benefit Year and a collection during the 1984 Australian Test match at the Oval, yielded over $25,000.

In addition, many business houses donated every item Larry needed for his home so he was well taken care of. As I write I think back of meeting Larry when he was 13 years old, dealing with all his professional contracts and enjoying his success on the cricket field. I saw him as a glorious stroke player up to his first tour in 1976 and then turn into a boring Mr Dependable in comparison. His son Richard was born on the same date as me and his daughter has the same name as my wife. My son is named Steven Larry and Larry is his godfather which has brought Steve fame in Canada among cricketers he might know. This year the young almost reclusive boy from Arima became a grandfather and we keep in touch on a regular basis. Twenty seven years ago I was prepared not to see him again but God is good and knows what is best for all of us.
http://www.guardian.co.tt/category/byline-authors/hugh-henderson